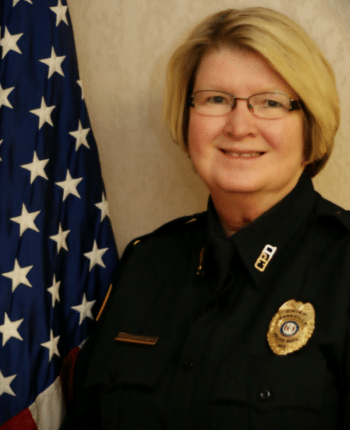 For as long as Dana Kammerlohr can remember she has loved animals, especially horses.  Dana received her first horse in the sixth grade and has been blessed to have at least one ever since. She has participated in rodeos, showed a palomino gelding in PHBA shows, and rode and showed in dressage, jumping, and cross country. As a child, she dreamed of horses and having a black mustang. That dream came true in 2017 with an adoption of a mustang from Rock Springs, WY (and a BLM burro who followed him home, at least that’s what she told her husband).

Growing up she worked in her family’s business in Cassville, MO.  Dana is a registered veterinary technician and worked in veterinary clinics for a number of years, including her husband’s. She became involved in search and rescue K-9 which led to a career in law enforcement as a K-9 handler and D.A.R.E  officer. Dana has been Chief of Police since 2009 and works a Belgian Malinois in narcotics and tracking.